The Shawnee National Forest (SNF) Collections Rehabilitation Project is a collaborative venture between the CAI and SNF archaeologists to curate collections from more than 30 years of archaeological investigations on Forest Service lands in southern Illinois. Undergraduate and graduate students participating in the project washed, inventoried, and rehoused cultural materials from more than 60 archaeological projects and 340 different sites. These artifacts record thousands of years of human occupation and lifeways in Illinois, and now serve as important resources for researchers, student training, and public outreach. The ongoing project is generously funded by the U.S. Forest Service.

Great Salt Spring and Camp Pomona are two of the largest SNF collections curated by the CAI. Additional information about these collections can be found below. 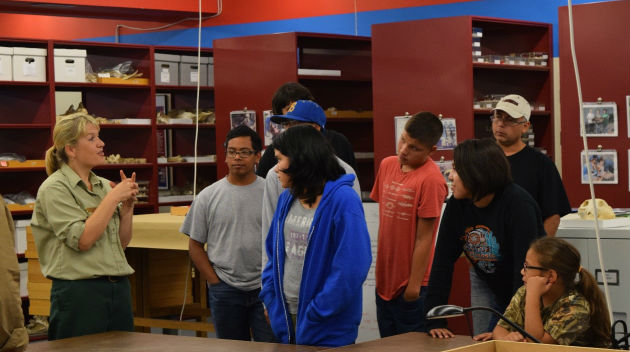 Great Salt Spring is a prehistoric site first occupied around AD 800 along the Saline River in southern Illinois. Here, Native Americans extracted salt from the naturally occurring salt springs, mainly as a seasonal activity during the autumn months. A team of graduate and undergraduate students rehoused this collection in archival storage. Some of the most interesting artifacts from Great Salt Spring include large ceramic pans used during salt processing, along with a wide array of chipped and ground stone tools. The rehabilitation project has provided a better understanding of the collection, and allowed archaeologists to access the collection for research. Most recently, a Mississippian groundstone axe from the site was studied by Rosanna Crow as part of her Master’s thesis research that traced the raw material source of axe-heads from Midwestern archaeological sites to the St. Francois Mountains in Missouri.

Camp Pomona was a Civilian Conservation Corp (CCC) camp built during the federal government’s New Deal program in the 1930s. Out of the 27 CCC camps nationwide, it was the only camp established specifically for an African-American company. Enrollees at Camp Pomona constructed roads and trails, participated in forestry efforts, and learned how to read and write. Due to increased war efforts during the 1940s, Camp Pomona was reassigned as a US Army camp, where it was used for strategic training maneuvers and to house German prisoners of war. CAI’s rehabilitation of this important collection identified numerous architectural items and kitchenwares made from metal and glass, along with medical and personal hygiene items. Some of these finds are pictured below. 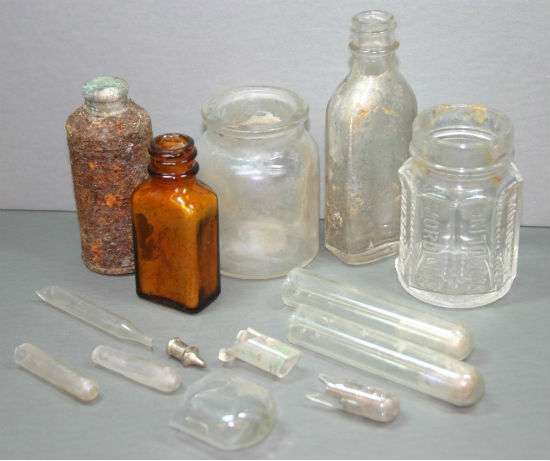 The photograph above pictures a variety of bottles from Camp Pomona, some of which contained medical and hygiene supplies (back row). The small jar on the right, which reads “Moroline,” held a petroleum jelly product. Remnants of test tubes and pipettes (pictured in the foreground) suggest doctors or nurses were present at the camp to treat illnesses and diseases amongst its occupants. 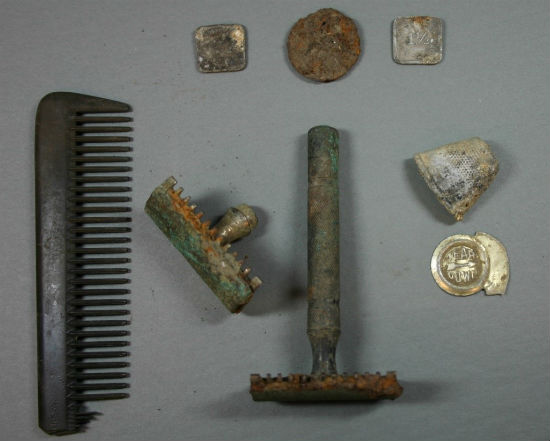 Personal items were also identified in the collection. The photograph above pictures sales tax tokens and an unidentifiable coin (top row). Tax tokens were first made in the 1930s to allow consumers to pay sales tax on small purchases, which often amounted to a fraction of a cent for inexpensive goods. The picture above also shows hygiene items, including a comb (left) and razors (center), and sewing tools used to repair clothing (thimble and needle threader, right).