The Cherokee Trail of Tears (TOT) is associated with the forced removal of the Cherokee people of Tennessee, Georgia, North Carolina, and other parts of the Southeast to the western United States in the late 1830s. From 1837 to 1839, thousands of Cherokee traveled through southern Illinois on what was known as the Golconda-Cape Girardeau Trace (now Illinois Route 146). Traveling on foot, horseback, and in wagons, the Cherokee camped along this road, bought supplies from settlers and tavern keepers, and buried those who died along this route. In 2013, the CAI engaged in three separate Trail of Tears–related projects for three separate agencies—the National Park Service (NPS), the USDA Forest Service, and the Illinois Historic Preservation Agency (IHPA).

Location of Illinois Section of Trail of Tears 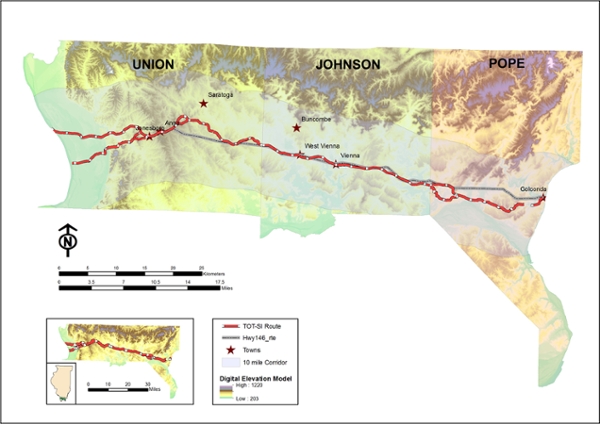 The project we conducted for the NPS in 2012–2013 consisted of an archival and historical study of the types and number of TOT-related sites in southern Illinois associated with the Cherokee Removal. Such properties included taverns, mills, residences, stores, ferries, cemeteries, and campgrounds. We examined the distribution of the above properties within a 10-mile wide corridor (five miles north and five miles south) of Route 146, the modern version of the trail that extended for 55 miles from Golconda on the Ohio River in the east to several ferry locations on the Mississippi River in the west. The results of this research were used to create a GIS database showing the distribution of cultural properties in both tables and figures (see below). A total of 545 cultural and 31 natural (springs) properties were located within the corridor. Of these, 414 were mappable as to location. Thirty-eight of these sites have associated oral history or written documents that link them to the Trail of Tears. Fifteen of these sites could be identified to specific location, while 23 could be located in only a general sense. 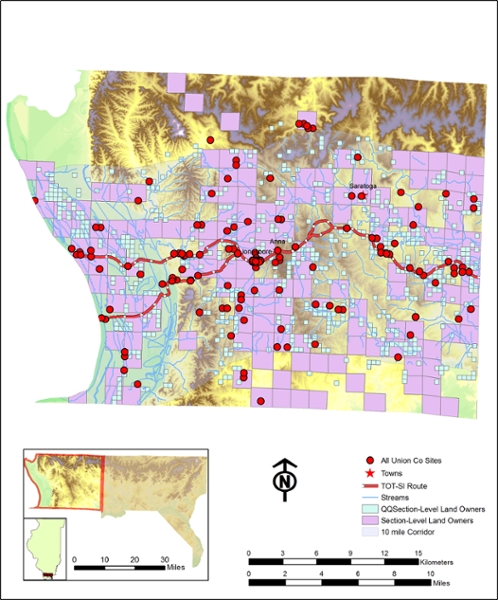 GIS map of 1830s property owners along the Trail of Tears in Union County, Illinois.

In the spring of 2013, the CAI assisted Shawnee National Forest archaeologists in the testing of two sites—11U316 and 11U615—located on Forest Service land along the southern branch of the trail that once led to a ferry used by the Cherokee to cross the Mississippi River and enter into Missouri. Indications that these sites potentially were associated with the Cherokee TOT included that one (11U316) possessed a spring, which could have supplied water to Cherokee emigrants, while the other (11U615) was known to have produced an early nineteenth-century smoking pipe manufactured by Moravian missionaries for trade to the Cherokee and other southeastern Native American peoples. The field crews for both sites consisted of volunteers enrolled in the Forest Service’s “Passport in Time” volunteer archaeology. Testing of site 11U615 recovered pre-1820 green shell edged creamware ceramic flatware sherds. This indicated that the spring at the site was in use in the early 1800s and potentially could have represented a stopping point for the Cherokee to obtain water for themselves and their animals. Archaeological testing of site 11U316 failed to recover additional early 1800s artifacts similar to the Moravian smoking pipe but did encounter the remains of a substantial prehistoric Mississippian period (AD 1000–1500) village that contained subsurface features. 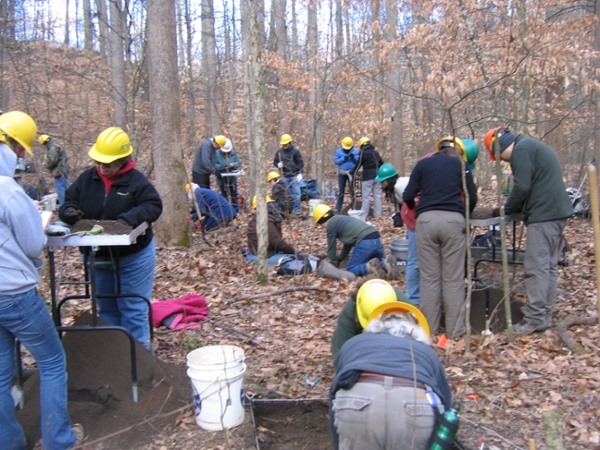 Passport in Time volunteers at site 11U615.

In August 2013, the CAI conducted investigations for IHPA at the Bridges Tavern site in Johnson County, which is located directly on the Trail of Tears. The site currently consists of the archaeological remains of the Bridges family tavern and a one-room log structure called the “Wayside Store.” Oral histories (ca. 1818–1940) collected in the 1930s stated that Cherokee traveling along the “Trail of Tears” purchased alcohol and other supplies at the Wayside Store while journeying through southern Illinois in 1837–1839. The goal of the investigations was to determine if the structure indeed could date to that period. Archival research revealed that the Bridges family indeed were selling alcohol and operating a store at the site as early as the 1840s, supporting the oral history. Architectural analysis of the Wayside Store also revealed that it was a pre-1800 structure that potentially could date to the 1830s. 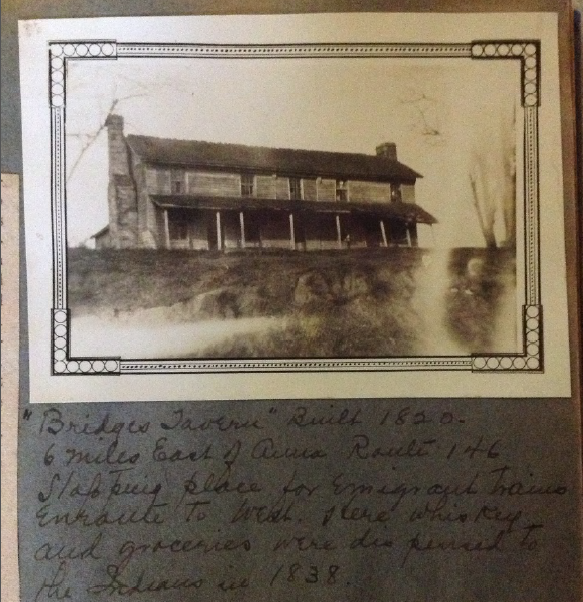 Archaeological investigations around and within the structure recovered early nineteenth-century artifacts and indicated that it represented an outbuilding (such as a store) rather than a residence. Our conclusion is that the combined lines of evidence—oral history, archaeological, architectural, and archival—indicate a strong likelihood that the Wayside Store indeed does date to the Trail of Tears (1837–1839) period. As such, it represents one of the only structures still standing in southern Illinois associated with this event. 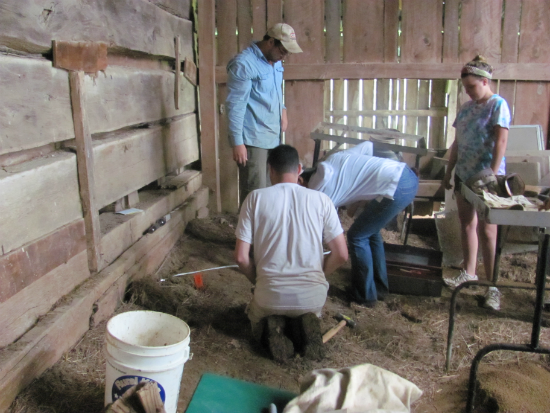